Lots of folks were talking about this play last night and again this morning. When looking with the all knowing eye of instant replay it’s obvious it never stood a chance. But they snapped the ball anyway.

Here is the disaster:

Coach Pagano quickly took the responsibility for not communicating clearly enough what had to be done in various scenarios. Good leadership there. But how did they get there?

They took a chance. They lined up hoping that the oddity of it would fool New England’s special teams unit and it didn’t. If it had then they might have picked up the line to gain. It was worth the risk. Since it didn’t work at all, there are a few things to learn:

Rarely do our mistakes get played out in HD with the entire field in clear view. What can you learn from the Colts disaster that will help you lead?

Should the spouse of a veteran pastor be ordained by virtue of their sharing in the ministry and leadership of their spouse’s congregation?

This post is for a very specific audience due to a rather odd circumstance of denominational legislation within the Assemblies of God. END_OF_DOCUMENT_TOKEN_TO_BE_REPLACED

You’ve probably seen the above images floating around the internet the last week or so under the title “Disney Princesses with Realistic Waistlines Look Utterly Fabulous.” Basically, it’s a collection of modified images of Disney princesses that takes their tiny little waistlines and expands them out to something a little more reasonable (even though they are still remarkably thin). The author is right. A little Photoshop makes these digital women look a little more like real women. We’ve seen enough of real women being Photoshopped into tiny semblances of themselves that seeing it go the other direction is a bit refreshing.

END_OF_DOCUMENT_TOKEN_TO_BE_REPLACED

Many will claim that the surge of women’s stories coming through the #YesAllWomen movement is overstated. Some men will be proud that they have never personally hurt a woman, thinking that exempts them. It doesn’t matter whether a man actually confronts a woman with violence, the cumulative effect of a culture of prejudice results in oppression even when no outward hostility is present.

END_OF_DOCUMENT_TOKEN_TO_BE_REPLACED

An increasing number of people, and especially the young adults that I work with each day, have come to identify with the malleable phrase “spiritual, but not religious.” There is good reason to believe that all kinds of people identify with the phrase, including some of the most highly religious people in the country, those conservative Evangelicals that proclaim “it’s not religion, it’s a relationship.” Even setting this ambiguity aside, it’s undeniable that many folks today are pleased to find “god” without the trappings of associating with a traditional religious community.

END_OF_DOCUMENT_TOKEN_TO_BE_REPLACED

I’ve not read Peyton Manning’s book, but this spiritual autobiography is remarkable given the integrity, class, and intensity with which he plays the game.

I don’t like everything about John Frame’s theology. But I consider him a holy man and thoroughly committed to his work. This is good advice for those of us that consider theology our vocation. 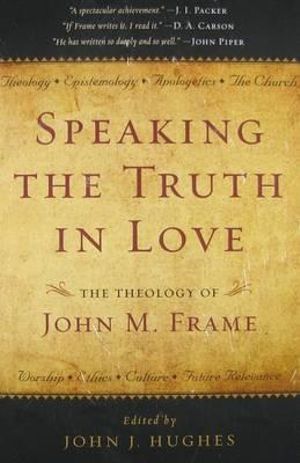 In response to the question “what advice would you offer to theological students and young theologians as they face a lifetime of theological work?”, John Frame gives the following 30 (!) point answer: