A portrait of Helenor Davisson made from the only known photograph of her, which is badly faded.

In August of 1866 the Civil War had just ended and America was slowly becoming a United States again as confederate states began rejoining the union. Perhaps more astonishingly, in that same year President Andrew Johnson vetoed the bill that eventually become the 14th Amendment, guaranteeing citizenship and equal protection under the law for black Americans. He did so in spite of such broad congressional support that his veto was overcome by a 2/3 super-majority. In the highest leadership position in the country, prejudice was preventing even basic rights for black Americans. Nine years later the Supreme Court would rule against women’s right to vote. Progress was coming on several fronts, but this was still an age of considerable challenges to equality.

At that same time in a tiny rural county in northern Indiana, Helenor Davisson was being ordained a deacon to preach the tiny circuit of churches where she and her father had been ministering for nearly 20 years. The Methodist Protestant Church was a smaller counterpart to the Methodist Episcopal Church, two of the many denominations that would eventually merge to form the United Methodist Church. Helenor’s father, John Alter, was a prominent businessman and preacher from Pennsylvania that took his family of 10 west to Northwest Indiana in Jasper County. When Helenor’s mother died when she was just 14, she became caretaker of the house while her father preached and built his mill business. 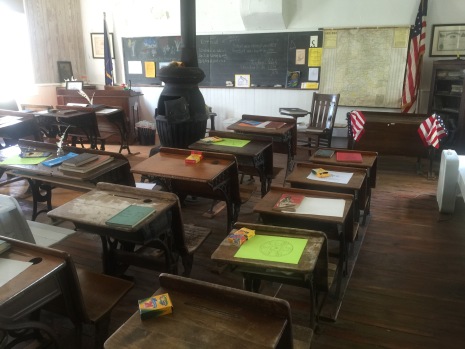 The one-room Rosebud School was built and donated by Helenor’s father and was home to one of the four churches on Helenor’s circuit.

Growing up in a preacher’s home with significant responsibility, she was a mature woman when she began preaching the circuit with her father in her early 20’s. Eventually they would grow the circuit to four churches and about 100 members.

Her story is not an easy one though, in spite of her significant ministry success. We don’t know all the opposition she faced in preaching as she kept no journal of her ministry as far as we know. But we do know some of the official oppositions. Helenor performed at least two weddings in her ministry. Soon there would be those who challenged the legality of those marriages. One has to wonder if she didn’t avoid additional weddings to avoid legal troubles that could ensue for the couple.  During Annual Conference the very next year after her ordination, several ministers tried to pass a resolution that would prohibit women’s ordination. Likely because of the respect Helenor had garnered, the resolution was tabled without definitive resolution. They would leave the matter to General Conference to decide.

It would be long after Helenor’s death before the Methodist Protestants would ordain another woman. Her name continues to appear in conference journals until 1874, so it seems that she continued in ministry. But she likely preached only rarely from that point forward as she grew ill for several years and died in 1876.

For the curious researcher, a couple short biographies have been written about her that can be found here and  here. There is also an unpublished biography (called The Little Pest) that started with some of Helenor’s personal autobiography of her early life, supplemented with details of her later life filled in with stories of friends and records of the Methodist Protestants.

I tell this little bit of her story here because my hope is that it will encourage those that are advocating for women’s leadership in the church. I’ve been advocating  since about 2003. That isn’t very long, but I have been working long enough to have seen some successes and long enough to have grown frustrated at times.  Recently I had the opportunity to learn about Helenor with a group of the historians that have worked to establish a cluster of five sites associated with her life as an official Methodist Heritage Site. That was a rich opportunity to hear of a woman that was far ahead of her time.

(A vote will be taken at General Conference in 2016 to give these sites “Landmark” status. Send this post to any GC delegates that you know so that they can learn about Helenor.)

We can all wish that the Church was always equally open to leadership of both genders. We could wish the effects of sin away. But the reality is that injustice has always been with us and will be with us until Christ returns. So working toward justice will inevitably be a long struggle that will often take three steps forward and two steps back. The situation is much better in the church today. But there are still those that oppose women’s ministry. As Martin Luther King once said, quoting an earlier minister, “The arc of the moral universe is long but it bends toward justice.” My eschatology is a bit different yet than King’s. Sin will always be with us until Christ returns. But even in spite of sin, the work of the Church and other people of good will continues to advance toward justice.

In the case of women’s ministry, the fight is not only for justice, but maybe even more importantly that the Church may more adequately fulfill her God-given calling.

My visit to one of the historical markers of the advancement of women in ministry leadership reminded me both of where the Church has come on this issue and the remarkable effort that it took to get there. Helenor reminds us that we are not trailblazers. Lack of historical awareness makes us believe that no one has gone this route before. Visiting her grave and walking through the building where she once preached reminded me that we are in the middle of the journey. It’s hard to be very frustrated when so many before have worked longer and harder. It’s also hard to be too impatient when progress will still be ongoing when we leave this life.

Be encouraged by Helenor’s story today and look forward to God’s coming Kingdom.

Click here to see all that I’ve written on women in ministry.