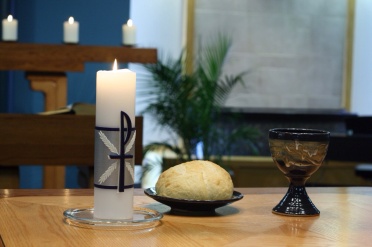 When I write in critique of the seemingly perpetual need to accumulate that dominates the Western mentality, I am still surprised how many God-loving and faithful Christians are convinced that this is only a concern of Godless communists. I’m fully aware of the ways that contemporary politics have controlled the concerns of Christians on the left and the right. Parsing out which policies to support from the various partisan options is difficult work. It is common for Christians in America that defend traditional notions of marriage and pro-life policies to also find themselves defending economic policies that put the poorest and most vulnerable citizens at risk for the sake of economic production.  How are we supposed to make sense of Christian men and women that defend the accumulation of wealth as a biblical ideal?

I’m more concerned about those Christians that claim that any notion of redistribution of wealth is somehow a violation of the commandant against stealing. Redistribution by legal means, taxation for instance, is not prohibited by Scripture. In fact, the system of tithes and offerings in the Hebrew Bible were almost certainly a means by which wealth was redistributed to the poor and the priests- the Levites had no means of productions of their own, not having an inheritance of land. So this rather odd argument isn’t a biblical one.

But I’m more intrigued by what kinds of unexamined predispositions would make someone read the Bible this way.  I came across an excellent analysis that makes lots of sense of it in a great book by John Perkins and Wayne Gordon, Making Neighborhoods Whole: A Handbook for Christian Community Development. The book is an excellent primer in the CCD movement’s principles and the history of the Christian Community Development Association. It’s made me think more carefully about incarnational ministry than I have in some time. In this case, the gem comes from an aside by Bob Lupton of FCS Urban Ministries, whom many know from his popular book Toxic Charity. I’ll quote it at length:

My spiritual work, I have to confess, has been learning to share. I grew up in a family and a culture where self-sufficiency was the normative value. There was little need for sharing. As a matter of fact, it was considered inappropriate to borrow from a neighbor. Every family was responsible for addressing its own needs.
Even among our own family members, each of us had our own room, our own clothes and our own “stuff.” You didn’t get into someone else’s things, at least not without permission. So when I relocated to a mixed-income neighborhood, I was not at all prepared to freely lend my lawn mower and my tools–let along my car (never!)–to neighbors, for whom sharing was an expected practice….
The morning I watched Virgil and Tamara pull away from my house in my late model Chevy on their way to the coast for a long-delayed honeymoon (with their kids!), however, I experienced a momentous internal value shift. It was a shift from individual ownership to kingdom stewardship. My possessions, I realized in a very vivid way, were not my own.

Stewardship is a very different orientation than ownership. I’ve been thinking about stewardship a lot the last four years because we call our student leadership team “stewards.” By doing so, we indicate to our student leaders that the ministries that the chaplains’ have been charged to do is being given into their care, but it is not their own. The ministry stewards are accountable to the chaplains’ for every decision that they make.

Similarly, every Christian is responsible to God for stewardship of their resources in ways that bring glory to Him. My wife and I have taken this seriously with regard to our spending. We have purchased our cars with cash. We purchased a home that we could afford on a 15-year mortgage. We have tried not to take debt on anything that was not our house or education. But Lupton is taking the call to stewardship beyond careful and moderate spending. He is calling for us to take seriously that our possessions are God’s property and not our own. As I look around my neighborhood, I don’t have the kind of relationships with my neighbors that I could imagine myself loaning my “stuff” to them. So Lupton really challenges me to reassess my orientation to that which God has entrusted into my care.

The other place that I’ve often heard the language of stewardship is in the United Methodist Church, where those that prepare the elements for the Eucharist are often called “communion stewards.” Not only do the stewards prepare the elements, but they also assist with distributing the meal to the congregation. Communion stewardship is a ministry of distribution and sharing. Maybe this Eucharistic sharing, a meal of fellowship where there is enough for all to eat and people are served irrespective of position and power, is the pattern to follow for our use of our “property.” Maybe our weekly sharing at the Eucharistic has the potential to form us into the kinds of people that see possessions as gifts that are not really ours at all.

This whole idea has really challenged me. What have you learned about sharing and how has it challenged your spiritual life?

You should definitely take a look at Making Neighborhoods Whole.

Related Post: It Takes More Than A Dollar To End Hunger