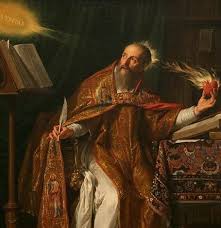 What would the greatest theologian in the history of the Church say to Americans on a day soaked with nationalism? This may seem like an odd question, but the parallels between Augustine’s place in the Roman Empire and ours in the United States are so plentiful that his wisdom is worth our attention.

Augustine’s Rome was widely regarded as the greatest empire in the history of the world- at least by its citizens. The pax Romana was not for everyone, of course. But if you were part of the empire you would have a great military providing safety from barbarian invaders. The network of roads was the best in the history of the world. Education and food and water were readily available. All one need do is pledge yourself to be faithful, make a few sacrifices, and dutifully pay one’s taxes.

I have little patience for those that decry the great evils of our nation. Each time our lawmakers cripple us with more taxes or a federal judge “legislates from the bench” on some issue we dislike, suddenly everyone is ready to leave for some other nation. How many times can a person ready to “leave for Canada” before they finally pack a bag and grab their passport?

St. Augustine would suggest that our nationalistic flag waving and our disgust with Washington are both misplaced.

For Augustine there is a distinctively Christian standard for what makes society ultimately Good. Do the people of this city love and honor God with their whole selves? If they do not do so, and no collection of people will do so short of heaven says Augustine, then the best that we can hope for is a society that pushes back the violence and injustice that would hinder a love of God. And that is precisely the role of government.

A good government makes space for worship of God by squelching violence and adjudicating justice between neighbors.

Augustine will also caution us against any notion that our nation has somehow been blessed and ordained by God in ways that no other nation has. In fact, Augustine famously said that the difference between Rome and a band of pirates is that the pirates have but one ship and the empire has an entire navy (City of God 4,4). The great growth of Rome or the United States is no sign of God’s blessing according to Augustine, but only a temptation to use our power unjustly.

For Augustine, America would be considered like Rome: a relative Good insofar as she provides the space for faithfulness to God. But no more ordained of God than any other nation which squelches violence and eradicates poverty so that her citizens may worship God with strength.

This heavenly city, then, while it sojourns on earth, calls citizens out of all nations, and gathers together a society of pilgrims of all languages, not scrupling about diversities in the manners, laws, and institutions whereby earthly peace is secured and maintained, but recognizing that, however various these are, they all tend to one and the same end of earthly peace. It therefore is so far from rescinding and abolishing these diversities, that it even preserves and adopts them, so long only as no hindrance to the worship of the one supreme and true God is thus introduced. Even the heavenly city, therefore, while in its state of pilgrimage, avails itself of the peace of earth, and, so far as it can without injuring faith and godliness, desires and maintains a common agreement among men regarding the acquisition of the necessaries of life, and makes this earthly peace bear upon the peace of heaven; for this alone can be truly called and esteemed the peace of the reasonable creatures, consisting as it does in the perfectly ordered and harmonious enjoyment of God and of one another in God. City of God 19, 17

So what would Augustine preach in American church on the 4th of July? I think Augustine would tell Americans to pray for their nation and its leaders. I think he would encourage the faithful to work toward just laws and the propagation of peace. And I think he would proclaim God’s coming Kingdom that is without borders and speaks no common language except the praise of God.

May Americans take the 4th of July to thank God for a place that allows the freedom to honor God with our lives. But may we steadfastly avoid any notion that Washington or New York or Chicago is that heavenly city that is without death or mourning or crying of pain.