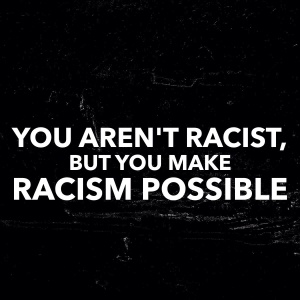 There are many ways that it is said, but the results are the same.

“If blacks would stop talking about slavery all the time they could just get on with successful careers.”
“I don’t see color. Black, white, and brown are all just people. Stop talking about it all the time.”
“Blacks shouldn’t be telling their kids about racism and they wouldn’t learn to think of themselves as inferior.”

Usually these people aren’t themselves racist. But this kind of talk does allow racism to continue in our country.

When my first post on racism went massively viral, I knew that some of the artistry of telling truth through story would be lost on some of the readers. Many of the comments on that post revealed that they didn’t understand my point that it doesn’t matter whether anyone actually confronts a minority person with hatred or violence, the cumulative effect of a culture of prejudice results in oppression even when no outward hostility is present.

I wasn’t surprised when many comments said what I used to believe. They pointed out that the story I shared didn’t include any actual prejudice persons confronting me or my son. “The fear of racism does not make racism,” they claimed. I too used to say that women and minorities need to just get on with living as if inequalities weren’t present. That living as if prejudice and racism were gone would allow people to get on with the business of living a life of opportunity.

There is some truth to this sentiment. Living a life of expecting and looking for prejudice does in fact cripple a person from living into a life of equality. In fact, that was the point of my post. But the error here is assuming that women and minorities can just turn a switch that allows them to ignore the very real prejudices, hatred, and even violence that they’ve endured.

One person told me that I can’t actually understand racism (which is why I named that post starting to understand racism) because when my black son isn’t with me at work, the store, or anywhere else I am able to shed my “black identity” in ways that my son can’t. I have the privilege of assuming that being denied employment, a loan, or service is based on merit and availability not my genitalia or the color of my skin.

That’s why so many white persons that read my post liked to claim that they weren’t racist because they are “color blind.” They claimed that they treated people as if race doesn’t exist, and that was the real solution to racism. Others, including minorities, just need to do what they do and ignore racial differences.

They are right that they are not actually racist, if they in fact treat people as if they are color blind. But they didn’t understand that this attitude actually enables a culture of racism.

These folks have failed to understand the differences between individual prejudice and institutional racism. Being “color blind” avoids the former but enables the latter. A massive amount of research that is being highlighted by Sheryl Sandburg’s Lean In campaign is showing that persons that experience prejudice have less confidence in their abilities and are therefore less likely to even apply for the opportunities that are available to them. In one study, only 49% of girls applied for a science competition while 71% of boys did so, even though the girls did just a tiny fraction worse on tests than the boys did. I suspect that this confidence gap causes similar results among racial minorities. That’s the effect of institutional racism even when individual prejudice may not be present. 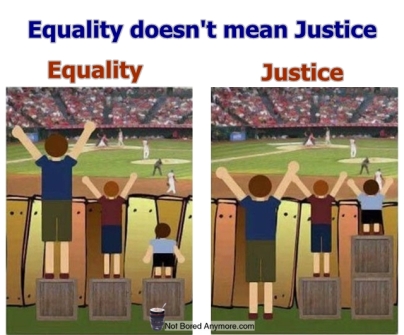 It’s therefore not enough that the doors are (in more cases than a generation ago) open to minority persons or women. To open a door for someone after they have effectively been crippled of the ability to walk through it by other instances of racism does not actually strike back against racism or its effects. If you are indeed “colorblind,” then you aren’t just putting a stop to the prejudice that affects racial minorities. You are also ignoring all of the past (and present) prejudices that prevent that person from having the confidence and opportunity to achieve. You also are ignoring that they will not even have the rather passive opportunity that “color blindness” provides when they go to their next opportunity. If you are “color blind,” then you aren’t a racist but you make racism possible.

This is why our nation needs something more than color blindness. Rather we need to see the particular gifts that a racial and gender diversity bring to our institutions. Studies have shown that a racially diverse workforce will result in increased sales revenue, larger customer base, increased market share, and higher percentage of profits. I don’t think we should utilize racial diversity for its economic benefits, but this serves to show that racism isn’t only bad for minority populations. It’s bad for all persons. And all people need to be encouraged to appreciate their ethnic heritage. Only majority persons get to pretend that race doesn’t matter. We’d do much better to notice ethnic diversity and celebrate a variety of beautiful gifts.